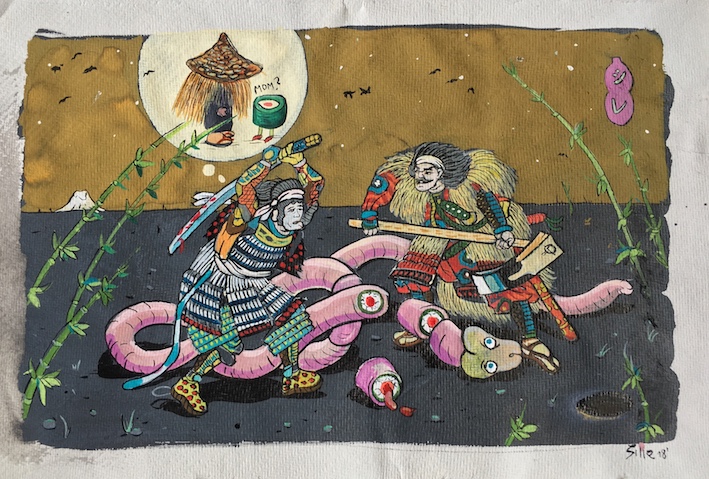 The adventure of Junshi and Newborn

Nothing is original. Steal from anywhere that resonates with inspiration or fuels your imagination… And don’t bother concealing your thievery celebrate it if you feel like it. In any case, always remember what Jean-Luc Godard said: “It's not where you take things from it's where you take them to.” Jim Jarmusch

This quotation introduced the work of Erik Šille (*1978, Rožňava) in the catalogue Painting after Painting (Slovak National Gallery, 2010) and in many ways rendered the work of undoubtedly the most successful painter of his generation. He raised attention already during his studies at the studio of Professor Ivan Csudai, when a strong “acrylic generation” of painters emerged. Although Šille belongs to its prominent representatives, he continually continually cultivates, develops and enriches his highly distinctive style with new elements and characters. Possibly the most characteristic feature of Šille's work is his sophisticated symbolism that utilizes the form, charm, and ambiguity of the animated world and comic characters.
wrote: Alexandra Kusá (General Director of Slovak National Gallery)

In his work, the hanging picture becomes an epitaph. A painted reminder of the dead, forgotten, lost and missing things. A gradual growth of dark colours, substituting the view from top by a frontal perspective or by a pure black surface of the background, unrooted burning houses, emptiness and mainly death, loss, sadness boldly move Šille towards a much more tragic form. He was inspired with traditional Japanese art print, Yokai, samurai, seppuku, lost demons and food.