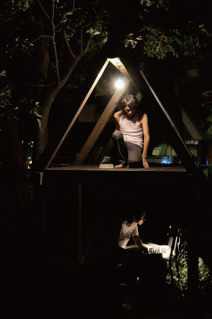 An extra issue of the "Unknown Series" organized and curated by artist Chika Kato since 2011 who has participated as part of the "Collective Parasol" in the Tate Modern event "No Soul for Sale" in 2010. This exhibition includes artists Mio Shirai who has participated in a number of international exhibitions since the 90s, twins Akiko and Masako Takada who collaborate as a unit to make work not limited to any one media, and Mineki Murata who makes guerrila-style performances the traces of which are exhibited as installations.

"What have artists perceived and created since 3.11? In the "Unknown" series, I have tried to interview artists, and the voice of those who participated have reflected delicate conditions beyond imagination. I have created an independent space to present their "voice". Here after 3.11, I want to reflect on the thoughts and work of the participating artists, and the changes that have occurred with time since the disaster." by Chika Kato